RUN FOR YOUR WIFE! at Hunterdon Hills Playhouse A meek and mild taxi driver, who is unable to say “no” to a woman in need, finds himself with wives in two different areas of London!  Over the years, he has been able to keep his dual lives separate – with no one the wiser – because of his astonishing ability to adhere to exacting timetables in his irregular work schedule. Then one day, the taxi driver’s schedule is knocked askew by a couple of hours, and he has the brakes suddenly applied on his slippery life style.  Complication is piled upon hilarious complication as the cabby frantically tries to keep his double life from exploding!

RUN FOR YOUR WIFE, starring EDDIE MEKKA  (a.k.a Carmine “The Big Ragu” Ragusa from the classic TV show “Laverne & Shirley”, is a highly successful, fast-paced comedy that left audiences rolling in the aisles in London and New York!
“Virtually continuous laughter.” – The New York Post 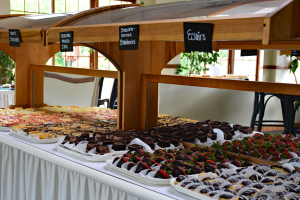 Itinerary subject to change as deemed necessary.  Journease Travel is not responsible for change in performers/performance/menu.