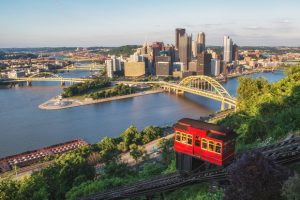 COME SEE IT FROM A DIFFERENT PERSPECTIVE!

From the Ferris Wheel to the Big Mac; Heinz ketchup to Mister Rogers’ Neighborhood there’s so much more to this vibrant city!  Experience why the home of the Steelers, Penguins and Pirates, was recently named one of the “Best Cities” by National Geographic and the “No.1 Food City ”, by Zagat, in the United States!

STEELERS FAN OR NOT, YOU’RE GOING TO LOVE THIS CITY!

We’ll begin with a stop at the Flight 93 National Memorial & Flight 93 Memorial Chapel, notably called “a common field one day; a field of honor forever.”

Both a memorial and perpetual tribute in honor of the Heroes of Flight 93, and all others who perished September 11, 2001.

Then, it’s on to to the IRON CITY, Pittsburgh, Pennsylvania, where it’ll be 3 Days of Nonstop FUN!

$725   per person, based on Double Occupancy